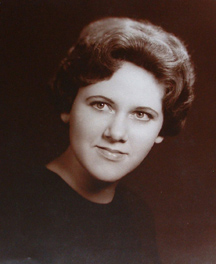 Each year on November 22*, I remember my mother. The world remembers John F. Kennedy on that day, the anniversary of his assassination, and the Christian world remembers C. S. Lewis, who also died that day. However, while I do remember both of these men, the one I most think about and grieve is my dear mother.

It’s been twelve years since she went to be with the Lord. They say that grief eventually subsides and, in one sense, that is true. I don’t actively grieve every minute of every day as I did that first year after she died. I don’t go to pick up the phone to tell her something and start to cry as I remember she’s gone.

However, it’s not true that you “get over it.” Grief of a great loss never truly goes away. It hovers in the background, waiting to pounce on you when you least expect it. Days like the anniversary of her death or her birthday or, for some odd reason, on my birthday bring her to mind. Milestones in my children’s lives, finding a recipe card in her handwriting, reading old letters or looking through photo albums, finding a purse in her favorite shade of aqua or receiving a gift from an old friend of something my mother made many years ago have also triggered memories. Any and all of these things cause me to tear up and remember the gift that my mother was, not just to me, but to so many other people.

My mother was born a month after the U.S. entered World War II. Her father was unable to fight due to health issues so while they didn’t have a lot of money, she grew up in a household with both her parents and was a much-loved only child. She learned her love of beauty from both of her parents, her ability to create art and garden from her father, her cooking and housekeeping and music from her mother. Her father’s sister was the one who introduced her to the love of books and good writing, which influenced my mother for the rest of her life.

My parents met while Mother was still in college, studying English, and they married before she graduated. She didn’t let a lack of a college degree get in the way of her learning though. She went on to teach herself a multitude of things, such as cut-glass work and quilting. She never passed up an opportunity to learn from someone else.

When I was a child, we lived next door to an Indian family, and my mother received recipes and help from our neighbor to learn Indian cooking. I still have the recipes and still remember the assortment of colorful lentils and flavored curries that Mother made. When my brother married an Italian girl, Mother went to the local community college and took Italian so that she could communicate with her in-laws, whose English was fragmented, at best.

Mother was always doing something. Like Martha from the Bible, she was busy with many things. She often said that while my father was working hard at work during the day, she should be working hard at home.

A few things I remember her doing: dipping pine cones in wax in the autumn for the fireplace each winter, standing over the kitchen sink soldering pieces of glass together, sewing something on her Singer sewing machine, and gardening. She had a large vegetable garden when I was young and after she gave up the large garden, she always had a small plot for herbs for cooking. And her cooking! She was a gourmet cook. Countless meals and gifts came out of her kitchen. I know she touched the lives of hundreds of people through her cooking alone.

She spent her odd moments of leisure doing needlework and taught me how to do embroidery, needlepoint, and counted cross-stitch. She sewed many of my clothes, my dolls’ clothes, and many of her own garments as well.

One of our most cherished memories was of the time we were walking through our favorite department store. One of the saleswomen in the suit department admired the suit I was wearing and asked me if I had bought it at their store. When I told the woman that my mother had made it, she was astonished and said that the suit was as beautifully made as any the store carried. What a triumph of Mother’s skill!

Mother was a letter writer. Before I was even in school, I called our typewriter a “type-a-letter” because that’s what my mother used it for. When my brother and I went away to school, we could count on at least one letter a week. She sent some emails but even when she used a computer in later years, she often printed the letter out and sent it in an envelope along with articles and other little things she had clipped and saved. I have years of letters in her beautiful handwriting that I treasure for the glimpses into her life, for the wisdom of her advice, and for the love that poured out to me in her words.

Mother believed in the idea of anything worth doing is worth doing well. Her gifts were wrapped as if they were done by an expert. Her home was always warm and inviting. The backside of her needlework creations was almost as beautiful as the front. Every garment she made had finished seams, so you never had to worry about loose threads, and I don’t remember ever losing a button off one of the blouses she made me. When she started quilting later in life, every quilt was beautiful—all her points came together in the piecing and the quilting was always perfect.

Best of all, my mother loved people and would go out of her way to befriend them and care for them. She spent her time, listening, advising, and serving her friends and acquaintances. After she died, many people told me how much Mother had meant to them. I only knew a fraction of them because her circle of friends was so wide.

How does one get over the loss of your mother? I remember my pastor once commenting that losing your mother is one of the greatest losses. He said that on his birthday, his mother would buy him a shirt and after she died, he missed those shirts. Your mother is the one who has known you from the beginning. Very few, if any, people will know and love you the way your mother does.

A good mother knows her children—their likes and dislikes, their weaknesses and strengths. A godly mother instills the truth of the gospel in her children from the time they are very small, she prays with and for them, and she teaches them the ways of God in her words and deeds. A loving mother spends time with her children and does many things for them. She encourages them when they are struggling, advises them when they are confused or lost, and is their greatest cheerleader.

Years ago, my mother and I read a book that said that our fellow Christians are our “balcony people.” The author was talking about Hebrews 12:1:

Therefore we also, since we are surrounded by so great a cloud of witnesses, let us lay aside every weight, and the sin which so easily ensnares us, and let us run with endurance the race that is set before us,

The author pointed out that the great cloud of witnesses in Hebrews 11 are the saints who have run the race before us and who are now standing in the balcony of heaven, cheering us on as we run the race of the Christian life.

When I lost my mother, it left a hole in my heart that will never quite be filled on this earth. But I can cherish the memories of her, share the good things she shared with me, advise my friends and family with the wisdom with which she advised me, and tell the world about what a good mother can be by telling the world who my mother was.

Go give your mother a hug. She is your first and best friend in the world and no one can ever replace her.

*Although I wrote this post on the anniversary of my mother’s home-going, it seems appropriate to post it on her birthday.

View all posts by Joy O'Toole

This site uses Akismet to reduce spam. Learn how your comment data is processed.

A Cat, A Book, and A Cup of Tea
nuakh

The Fight of Faith

Book reviews by someone who loves books ...

The strongest memory is weaker than the palest ink. I write to remember.

FORGET NONE OF HIS BENEFITS

Notes Along the Way

Lanier Ivester
Journal of a Bibliophile

Just a millennial trying to balance fangirling and faith.

On life, writing and horses!

Life in the Country. Botany and Books.

"whose nature prefers trees without leaves and a fire in the fireplace..." -Louis MacNeice

Reading in Between the Life...

adventures in learning, literature, and life!

Miriam Rockness: Reflections on the Art and Writings of Lilias Trotter